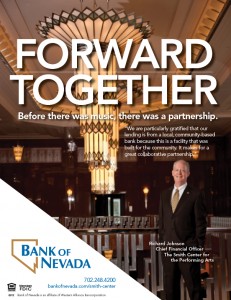 SQUEEZ marketing recently unveiled the advertising campaign it developed for Bank of Nevada, a critical contributor to the Southern Nevada economy. The campaign focuses how the bank and the community, working together, can spark positive change in spite of the tough economic environment that’s existed for the past several years.

The tagline –  “Forward Together” – was created to succinctly make the point.

“The idea of ‘Forward Together’ reflects the bank’s long-term commitment to businesses and organizations to stimulate growth and improve the quality of life in Southern Nevada” SQUEEZ marketing founder and creative director Peter Poggione said.

Bank of Nevada is the second largest locally-chartered bank in Las Vegas with assets of $2.9 billion.

“Since our inception, Bank of Nevada’s core mission is to be an active partner in the community promoting business growth and job creation”, said Bruce Hendricks, CEO for Bank of Nevada. “Forward Together is an affirmation of our original mission which is especially relevant in Las Vegas today.”

As part of its campaign, the bank has begun new ads featuring clients who reflect the different sectors of the Southern Nevada community, beginning with The Smith Center for the Performing Arts. 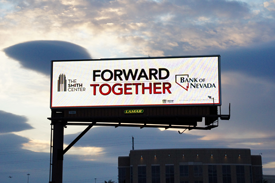 The bank has also launched a quarterly event series. The first event highlighted the achievements of the Southwest Career and Technical Academy.

Robert Sarver, Chairman and CEO of the bank’s parent company, Western Alliance Bancorporation, was the featured speaker and emphasized the imperative need to raise the high school graduation rate and for a quality, meaningful education. “This Academy is an example of how you can do those things. The key is to get students to graduate so they can go on to college, build a business or get a good job,” he said.

Bank of Nevada President and COO John Guedry, a longtime active supporter of local education initiatives, announced that the bank has established a scholarship fund with a donation of $15,000 over the next five years to fund scholarships at the Southwest Career and Technical Academy. The first scholarship receipient will be announced at the Public Education Foundation annual award luncheon in May.

Through both donations and employee participation, the bank supports over 80 local charitable organizations each year. Bank of Nevada has earned an Outstanding rating from the FDIC in each Community Reinvestment Act examination since its founding.

Greenwich Excellence Award have been recognized by their clients as providing superior quality products, services and coverage. Bank of Nevada was the only Nevada state-chartered bank to receive this distinction.

Bank of Nevada has a unique niche among banks in Nevada by offering a broad array of financial services often found only in larger banks, while maintaining the personal attention of a small community bank. Known for its high level of professional quality service, each client is served by a single, local relationship manager.

By poggione11|April 26th, 2012|Advertising, NEWZ|Comments Off on BANK OF NEVADA AD CAMPAIGN LAUNCHED

About the Author: poggione11