SWITCH IS LATEST IN BANK OF NEVADA AD CAMPAIGN

SWITCH IS LATEST IN BANK OF NEVADA AD CAMPAIGN

SQUEEZ marketing unveiled the latest ad of the testimonial campaign it has developed for Bank of Nevada, this time featuring Switch. 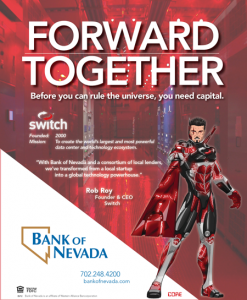 Switch – under the direction of founder Rob Roy – has gone  from local startup to one of the most important data storage companies in the world by providing what is arguably the safest, most efficient, and most cost effective data storage on the planet.

Many of its clients are featured on the Fortune 1000 list and include such names as Google, Sony, eBay, Cisco, HP, Intuit, VMware, EMC, FOX, myspace, Zappos, MGM, Caesars, and Boyd Gaming, in additional to clients from the banking, healthcare, technology and government industries.

“To feature a company as progressive and innovate as Switch was a dream come true,” SQUEEZ founder Peter Poggione said. “Seriously. How many companies out there have their own avatars?”

SQUEEZ launched the testimonial campaign in March of 2012 featuring recently opened The Smith Center for the Performing Arts. The Smith Center was close to a half-billion-dollar project that Bank of Nevada provided a portion of the financing for.

“Every chapter of this campaign is interesting, and now with Switch coming on the heals of The Smith Center, you can start to see the larger story we’re telling,” Poggione said.

By poggione11|May 14th, 2012|NEWZ|Comments Off on SWITCH IS LATEST IN BANK OF NEVADA AD CAMPAIGN

About the Author: poggione11